The Moral Witness: Trials and Testimony after Genocide (Corpus Juris: The Humanities in Politics and Law) por Carolyn J. Dean

Titulo del libro: The Moral Witness: Trials and Testimony after Genocide (Corpus Juris: The Humanities in Politics and Law) 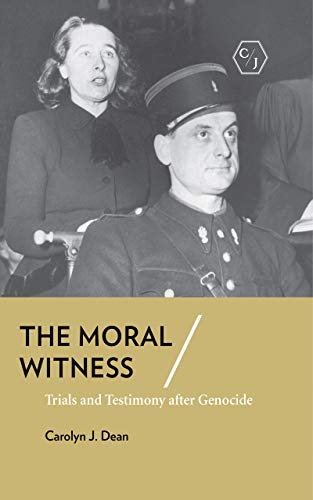 Carolyn J. Dean con The Moral Witness: Trials and Testimony after Genocide (Corpus Juris: The Humanities in Politics and Law)

The Moral Witness is the first cultural history of the "witness to genocide" in the West. Carolyn J. Dean shows how the witness became a protagonist of twentieth-century moral culture by tracing the emergence of this figure in courtroom battles from the 1920s to the 1960s—covering the Armenian genocide, the Ukrainian pogroms, the Soviet Gulag, and the trial of Adolf Eichmann. In these trials, witness testimonies differentiated the crime of genocide from war crimes and began to form our understanding of modern political and cultural murder.By the turn of the twentieth century, the "witness to genocide" became a pervasive icon of suffering humanity and a symbol of western moral conscience. Dean sheds new light on the recent global focus on survivors' trauma. Only by placing the moral witness in a longer historical trajectory, she demonstrates, can we understand how the stories we tell about survivor testimony have shaped both our past and contemporary moral culture.