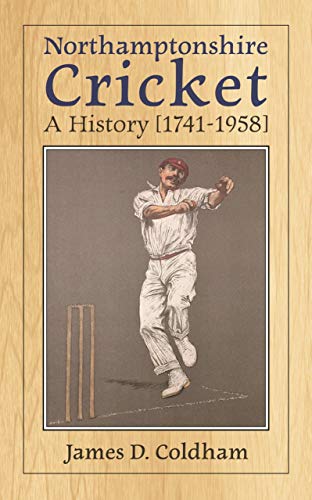 ‘A must have book for any Northamptonshire cricket lover or supporter interested in the history of their County Club, and for any historian of the English county game.’

When ‘Northamptonshire Cricket: A History’ was published it was the first such book about the County: a complete history from earliest beginning to the end of the 1958 season.

Its author James D. Coldham wrote was a prolific researcher, article and essay writer but only wrote two full length books, of which this was the first.

‘Northamptonshire Cricket’ was at the time of its publication in 1959 a complete history. It needed no other subtitle than ‘A History’. But that was then, and this is now, 58 years later. The Editor has, therefore, taken the liberty of subtitling the 2nd Edition ‘A History: 1741-1958’ in the interests of making it unambiguously clear that the book makes no claim to be a ‘complete’ history of the County Club.

Notwithstanding, it remains the most scholarly and comprehensive study of Northamptonshire cricket from its earliest days to the late 1950s; a study of a kind matched by few historians of other first-class counties.

Notes from the original dust cover of the first edition:

‘It is appropriate that this book should appear now -making good an important and long-recognised lack in the literature of cricket - when, for the first time, Northamptonshire is firmly established among the leading and regular challengers for the County Championship.

[The author] begins with the village cricket which gradually took deeper root until, in 1878, it was ready to join up with the original County Club that had grown out of the Northampton Town Club. He then traces the steady progress in face of many problems which eventually led Northamptonshire - largely through the advocacy of Lord Lilford and A. J. Darnell, and the all-round power of George Thompson - into the ranks of the first-class counties, and to the meteoric rise to the runner-up position which amazed the cricket world of 1912.

Between the wars Northamptonshire experienced, in terms of results, some very lean years but during that period the County was not without some fine successes and great players: V. W. C. Jupp, E. W. Clark, A. H. Bakewell - all England players; K. C. James and W. E. Merritt, the New Zealanders; the popular J. E. ‘Jack’ Timms, tiny ‘Fanny’ Walden, R. J. Partridge and A. D. G. Matthews - all colourful cricketers, men of character as well as of considerable playing ability.

Finally comes the post-war period [1945-58] of Northamptonshire as a county of growing wealth, throwing a recruiting net around the world. Local players are watched, tried out and coached to a greater degree than ever, but meanwhile Northamptonshire [writing in 1958] has built up one of the strongest sides in the country strong enough, indeed, to beat the County Champions, Surrey, quite decisively and to finish second in the table. This more recent era provides a most impressive list of players—Freddie Brown, Frank Tyson, ‘Jock’ Livingston, Dennis Brookes, Jack Manning, George Tribe and Keith Andrew.