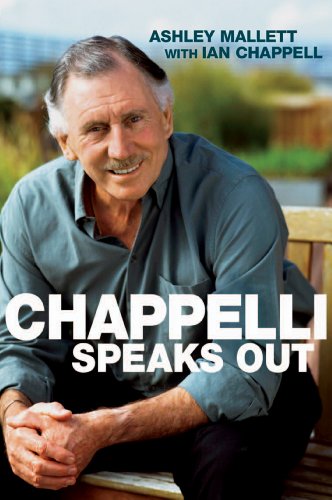 Chappelli a great competitor on and off the cricket field. Loves his cricket and he's not afraid to share his opinions of the game. His thoughts are always well worth reading.'

With Chappelli it is either black or white, but always passionate.'

In 1959, a sixteen-year-old Ian Chappell was told to write down his cricket ambitions on a piece of paper and carry it with him always as a constant reminder of what he wanted to achieve in the game. He wrote: My ambition is to captain Australia.' He still had that piece of paper in his wallet when on 4 February 1971 the man they call Chappelli became Australia's Test cricket captain.

In Chappelli Speaks Out, the man many regard as one of Australia's greatest Test captains, talks frankly with Ashley Mallett about his years in cricket, other cricketers both past and present, the administration of the game and his involvement in sometimes controversial social causes such as the campaign against refugee detention centres. This is the story of a man who is as forthright as he is fair, and who led Australian cricket through one of its most successful times and certainly its most turbulent.